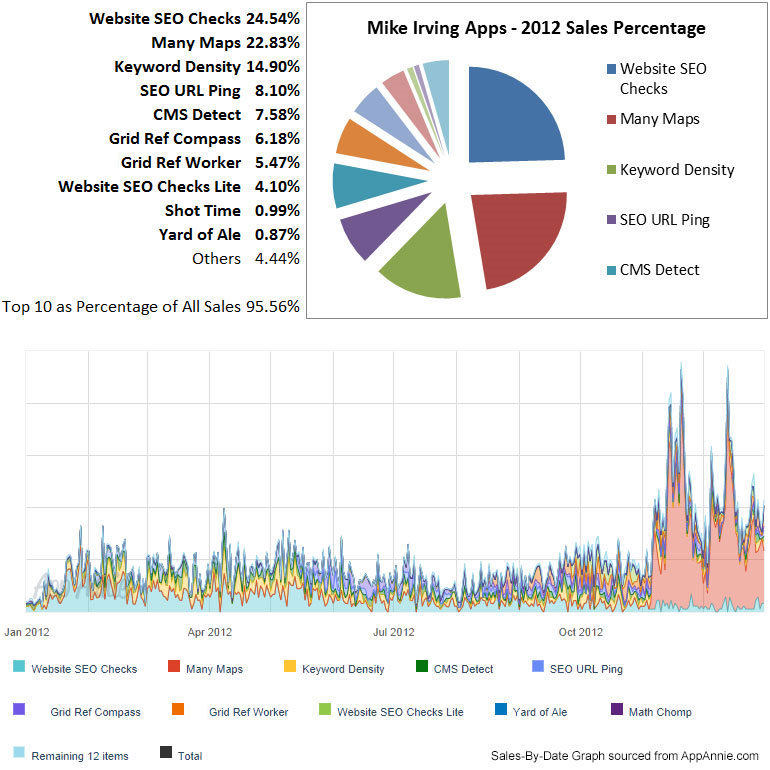 In the past twelve months, my development of mobile Apps for iOS (iPhone/ iPad) has gained serious pace.

I tried many new things development wise in 2012.

Website SEO Checks Lite represented my first venture into "Free" apps with "In-App Purchasing". The results from the app have been positive. Only launching at the end of September, the "Lite" app appears to have complimented the paid version, rather than competing with it. iAd, Apple's Advertisement Platform, has also provided a little extra revenue from the app.

Perhaps the most impressive application in the above list has been Many Maps. Despite only launching in early November, its sales represented 22.83% of those for the year in total! Initially developed to provide an alternative to iOS6 Maps, I was not even sure if the app would be approved by Apple. I am glad that it was, and several updates have already been issued in the short lifetime of the software.

In the past few months, I have also begun the task of updating my apps for the 4 Inch Screen of the iPhone 5. Expect more to follow.

• Dot Net North on Meetup.com
Previous Blog Entries
15
May
2012
New Mapping App for iPhone, updates
It has been a little while since my last new app release, but my latest creation, a GPS / Navigation aid for Walkers with an iPhone, is now available in the iTunes AppStore. GB Grid Ref Compass is ...