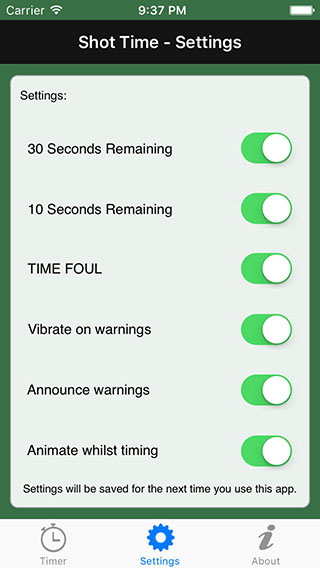 Shot Time is an App designed as a Timing Device for the refereeing of 8 Ball Pool Matches.

Under current rules, there is a maximum shot time, after which a "Time Foul" is awarded.

The app makes it plain and simple to time each players shots, and gives on-screen warnings as appropriate. The iPhone also vibrates to alert the timing person to each alert.

An options screen allows the app to be configured to suit.

No internet / data connection is required whilst using the app, so it is also ideal for use on an iPod Touch.

"Shot Time" was my first published app to be developed entirely on a Mac, using Xcode and Objective-C.

Version 1.3 added support for the 4 Inch Screen of the iPhone 5, and also boosted the volume of the vocal announcements.

As of Version 1.5, a "free version" Shot Time Lite was launched, supported by ads, and upgradeable via In-App Purchasing.

07
Dec
2021
Co-organiser at Dot Net North:
Null & Void - Everything about Nothing
A Meetup for the Microsoft Developer Community. Online event.