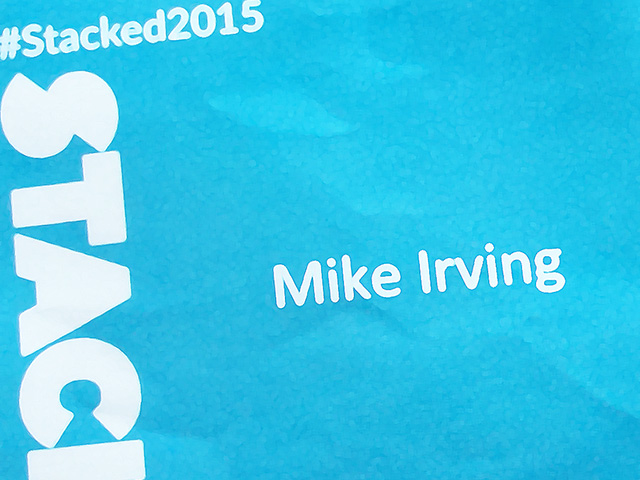 Last Wednesday I was at the Stacked Conference for Windows Developers, in Manchester.

It was brilliant to have such an event up in the North West, and the venue, The Comedy Store at Deansgate Locks, was a great choice.

Although not officially a Microsoft event, many of the speakers we're from Microsoft, and alongside the other sponsors, Mando and DevExpress, helped create a fantastic day.

The Morning Sessions we're from Mike Taulty and Jeff Burtoft, and focussed on the Universal Windows Platform (UWP) and the Windows 10 Web Platform, accordingly.

Watching Mike control a Sphero Robotic Ball via a UWP App on Desktop, Phone, Raspberry Pi, via Touch, Voice and Xbox Controller, was captivating for the audience.

The food, Curry, was most welcome by the large number of attending developers!

After Lunch, Mary Jo Foley, a career-long Microsoft journalist, held an open dicussion on Microsoft Now and Next.

The show was very well organised, and was closed, as it was started, by Gary Pretty from Mando.

After an evening break, Mary Jo Foley returned to the stage with Paul Thurrott to record the Windows Weekly show, live from Manchester.

I love going to developer shows. I learn things. I discover new technologies. But most of all, I meet fellow developers and techie people.

Whilst I love travelling to events, often in London, having such a high-profile, and well managed, event in Manchester is amazing, and something I'd love to see more of in the future.

• Dot Net North on Meetup.com
Previous Blog Entries
23
Nov
2015
Mobile Website Optimisations
Slowly, over the last few months, I have been readying a new version of this website. Ironically, as a Mobile Software Developer, the previous version wasn't "Mobile Friendly", meaning that Smartphone...

• Read This Blog Entry
15
Oct
2015
Fisherman's Friend Factory Tour
Last week I was lucky enough to be in Fleetwood, Lancashire, for a special 'once in a lifetime' tour of the Fisherman's Friend lozenge factory, as guest of Lofthouse of Fleetwood Ltd. I came to be ...