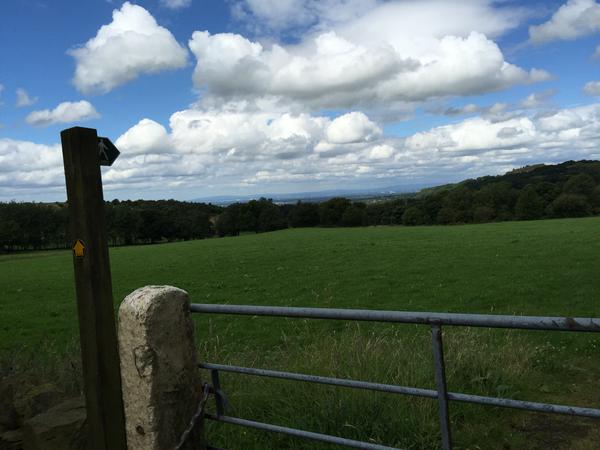 Since New Year, I have been using a Fitbit Charge Activity Tracker, after receiving it as a Christmas Gift.

Following the seasonal break, and the usual indulgences that followed, I began to take my fitness more seriously, inspired by the data I was getting from my shiny new wearable device, and the competitive / social aspect of Fitbit, whereby I could see how many daily steps I was taking compared to my friends.

In combination with some dietary changes, I began to take several long walks a week, usually on my lunch breaks from work.

I am fortunate enough to live on the doorstep of England's Peak District, and a short walk from the suburbia of Macclesfield leads to beautiful countryside.

Since New Year, I have shed 2 stone, and feel really good about my health and fitness. Obviously I cannot attribute all of this to Fitbit, but it did provide a starting block, and a continual point of reference for my progress.

My wristband is now looking quite tatty, and is falling apart in many respects, splitting at the seams etc, but the data is still flowing.

I did look at the Fitbit API, from a developer perspective, but I am more interested in doing work with some more powerful smart devices.. maybe that will manifest soon with Microsoft Band or Apple Watch applications. Watch this space!

I have penned this blog in relation to the #LumiaFitnessInspiration Competition from Microsoft. Should I win, it is highly likely that I will embark on a Microsoft Band App Build, and that the MS Band will replace my ailing Fitbit Tracker.

• Dot Net North on Meetup.com
Previous Blog Entries
20
Feb
2015
Twitter Flock 2015, London
Yesterday I was amongst 400 Software Developers gathered in London at quite possibly most interesting, inspiring and genuinely useful Developer Event I have been to! We were gathered as invitees of...

• Read This Blog Entry
03
Jul
2014
Hello Android, Hello Windows Phone
I was an early iPhone adopter, buying an iPhone 3GS back in 2009. Within a year, I turned my attention to App Development on iPhone, and shortly afterwards the newly launched iPad. My Apps continue...