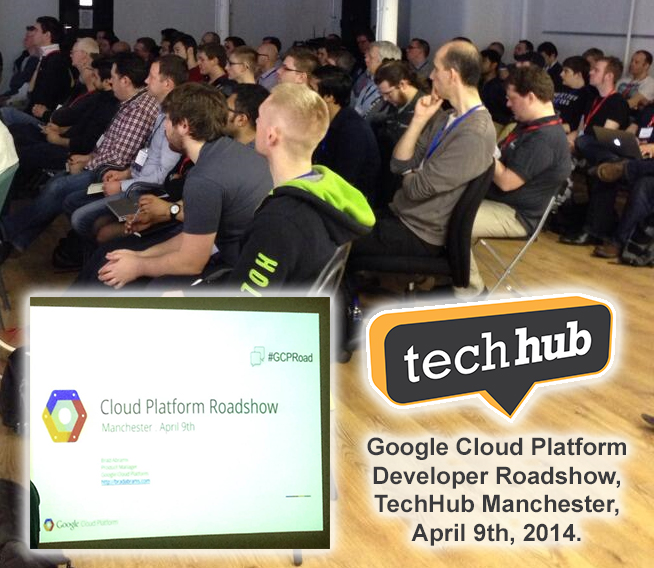 Last week I was in attendance as the Google Cloud Platform Roadshow visited the newly relocated Manchester TechHub.

I learnt a lot about the Cloud Platform offerings from Google, got some answers to some of my questions about the various systems, and enjoyed some great food!

These demos consisted on the front end apps as a Sudoku Solver and a Meme Creator!

The whole system was very impressive, as well as very quick, scalable and robust.

As a Microsoft Developer, I was keen to deduce the state-of-play for Windows, ASP.Net and SQL Server support on the platform.

The fact that Brad Abrams, a former Microsoft man, was giving the Keynote, gave me a great opportunity to voice my questions and find out more.

Windows Server VMs are currently available on Compute Engine, but the roadmap is not yet clear for if, and when, .Net / C# and MS SQL Server might become available on the VM-Free App Engine.

One thing is for sure, Cloud Computing is the future, and the Google Cloud Platform aims to be a key player, alongside Microsoft Azure and Amazon Web Services.

The TechHub in Manchester, on Lever Street, is great too. I hope to attend future events there.

• Dot Net North on Meetup.com
Previous Blog Entries
30
Mar
2014
Nokia X Go! Port - London
On Friday I was lucky enough to be one of a select bunch of European Developers to join the Nokia X - Go! Port Bus Tour, at the final stop in London! The Bus, a converted, green painted, London Rou...

• Read This Blog Entry
28
Feb
2014
Setting up iOS Projects for Cordova
I recently had reason to use Apache Cordova / PhoneGap to build a Native-Wrapped HTML5 App for use on iPad. Whilst I have worked on PhoneGap / Cordova projects in the past, I found the setup proces...