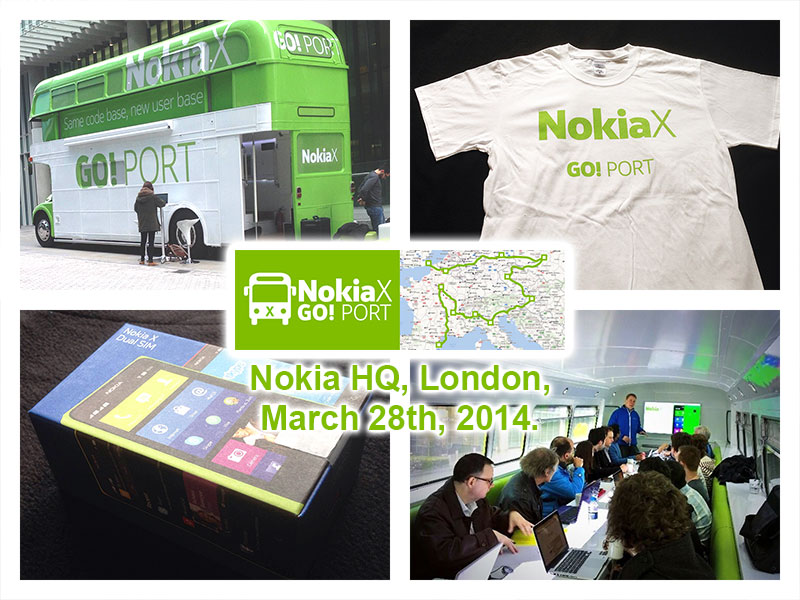 On Friday I was lucky enough to be one of a select bunch of European Developers to join the Nokia X - Go! Port Bus Tour, at the final stop in London!

The Bus, a converted, green painted, London Routemaster Bus, had been touring Europe through March 2014 to promote the new Nokia X Android Platform to Developers, since the platform was announced at Mobile World Congress (MWC) back in February.

Aboard the bus I was presented with first-hand information about the new phone handsets, straight from Nokia, by way of a Technical Workshop. There was also a compelling case made for supporting the new smartphones, along with comprehensive technical support regarding Here Maps, Nokia In App Payments, and Nokia Notifications.

Following the presentation, I took the opportunity to "port" some Android Apps for the Nokia X Store, and to test them out on actual Nokia X handsets. There was useful support on-hand from experts.

The event was well organised, and well delivered. It was a good opportunity to meet some of the team at Nokia, as well as some other talented developers, from across the globe!

Developers also love freebies along the way: I will be happy to wear the Go! Port T-Shirt at future Dev Events!

I will be supporting Nokia X, along with other Android handsets and storefronts, with forthcoming Mobile Apps.

Nokia, and Microsoft, do a lot to support their developer network. Such events are very welcome, as are various ongoing Webinar events, technical documentation and sample code, and the DVLUP program.

DVLUP is an initiative run by Nokia, and partners, to support developers to build great apps. They do this by offering rewards, challenges, and great fun.

DVLUP is open to all developers, and supports development on Windows Phone, Nokia X and Asha Smartphones.

• Dot Net North on Meetup.com
Previous Blog Entries
28
Feb
2014
Setting up iOS Projects for Cordova
I recently had reason to use Apache Cordova / PhoneGap to build a Native-Wrapped HTML5 App for use on iPad. Whilst I have worked on PhoneGap / Cordova projects in the past, I found the setup proces...