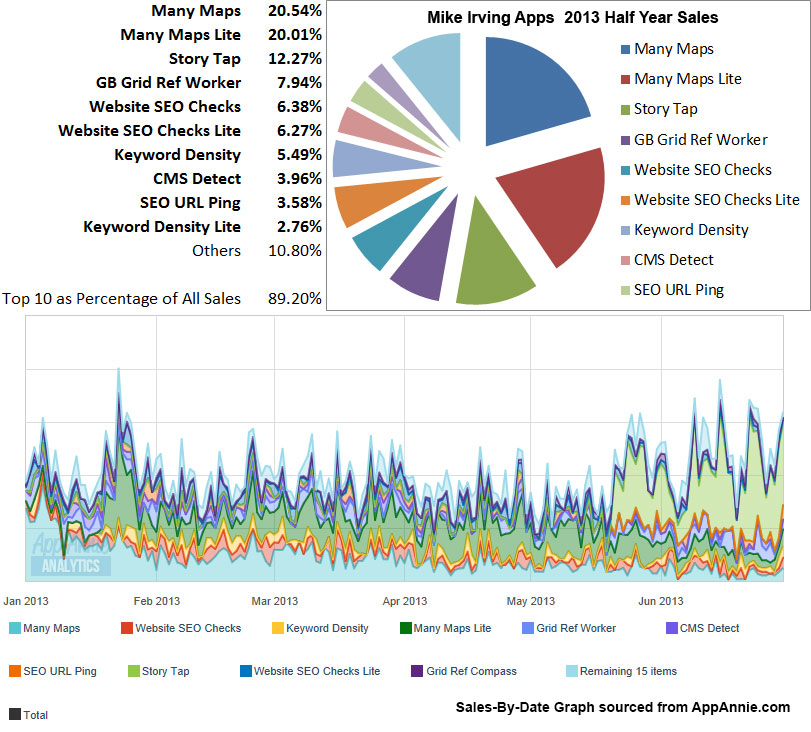 Some of you may remember reading my blog post from New Year, summing up my App Revenue Performance in 2012. Indeed the blog posting proved popular and gained some good reaction from Social Media.

Link: A Look Back at 2012 - A Highly Successful Year in the App Store

It is nice to see some New Apps making a big impact on the figures, including some of my Lite "Freemium" Apps, featuring In-App Purchases.

Some of my older apps appear to be becoming classics too, namely the SEO Apps.

My predictions for the rest of the year are that the impact of Many Maps and Many Maps Lite will be further diminished, and that (hopefully) some yet-to-launch applications will feature in the full-year figures!

2013, so far, hasn't seen as many new Mike Irving Apps as 2012 did. Much of the year has been spent improving the current offerings, and Upgrading Apps for the iPhone 5.

However, I have an ever-growing list of new app projects - expect to see new launches before the year end!

• Dot Net North on Meetup.com
Previous Blog Entries
28
Mar
2013
Moving websites to a Dedicated Server
Moving my websites to a new web server Recently I decided to take the plunge and purchase my own Dedicated Server to run my Websites and Mobile App Web Services. I had until this point been runn...

• Read This Blog Entry
15
Feb
2013
Adapting Apps for the iPhone 5
Since late last year I have been altering my existing iOS Apps to make use of the 4 Inch display of the iPhone 5 (and iPod Touch 5th Generation devices). Likewise, all my new iPhone App development...