I have recently taken the decision to retire a bunch of mobile applications, many of which I have been working on for nearly 10 years.

My personal mobile apps have always been a hobby project. As such, there has often been very little time for them, and the time I could find has been sporadic, especially in recent years.

Clearly that’s been a big undertaking.

When apps don’t get regular attention, they can quickly fall into disrepair. The UI may begin to look old fashioned. Features may no longer be at their best. Rival apps may have appeared that make your apps look basic or irrelevant.

A week or so ago, I began to pull six old mobile apps.

I’d decided, based on downloads and revenue in the last 12 months, or lack thereof, that they really weren’t worth keeping, and indeed had become a distraction from my other apps.

I have decided to keep my core nice ‘grid reference’ apps going, and just a handful of others. I may further consolidate these as time goes on.

Pulling 6 apps took some time, but at least they are now gone. The 6 apps were available on iOS, Windows and Android, with unique versions of the latter for 3 Android App Stores. There were also a bunch of APIs supporting these. 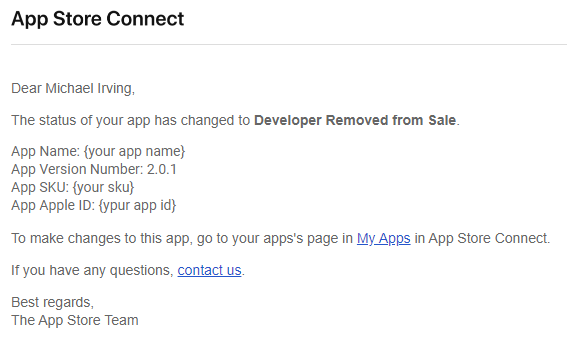 It is good to have pulled the plug, a huge relief, whilst keeping fond memories of how the apps were in the past.

Talking of Windows, or specifically about the past of Windows Phone, I’m now down to 5 apps in the store there. Perhaps clinging on in hope of one more revenue pay-out. It has been a while.

Removing Apps isn’t the right approach for every application. There are many other options. I wrote a further blog post back in 2017, explaining these options, which actually reads really well still. Please see What should you do with old apps?